The Y40 is a New Dirt Racer, Built to Revive an Old Name. It is Definitely British in Concept, and it has, “What It Takes”. 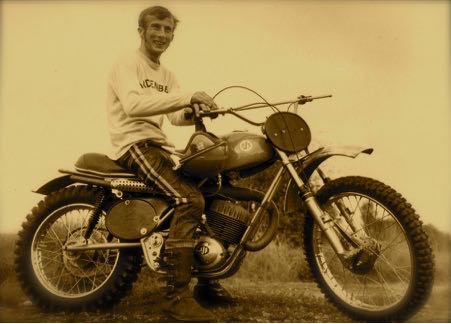 Then in a shower of sand and rocks, the Swede charged up the slippery approach with the front wheel clawing in the air, the bike quickly reached the final 20 feet of sheer rock.

Without hesitation, the astounding unity of man and machine cleared the summit, the first official and successful attempt by a 250cc machine in the parks history.

This was our introduction to the all-new motocross machine, the Cycle World test staff, it was an explosive tribute to a motorcycle that is the revival of the AJS name, and at last is being offered to the privateer. 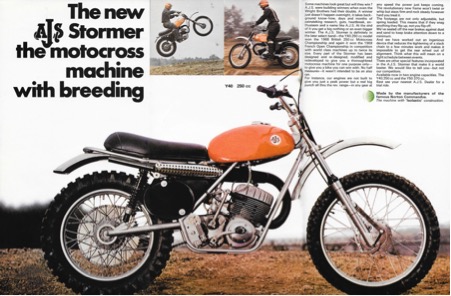 Norton Villiers developed the AJS Y40 with one purpose in mind; build a machine to win motocross events. Utilizing the advice of the firm’s young engineers, they set out to achieve their goal.

This project had to be new from the ground up; no makeshift rebuild of an existing model would be competitive against the machinery currently available. Engine development was the first step; without a robust powerplant the new machine wouldn’t stand a chance.

The goal was a two-stroke with lots of power, with the broad torque curve necessary for the rigors of motocross.

Requirements for this type of performance are met with the AJS 250’S single cylinder engine unit. A square bore/stroke dimension is used, which is not in keeping with previous British practice of small bore-long stroke engines.

To gain the needed horsepower, the engine would have to work at a greater rpm. Long strokes and high crankshaft speeds have never been beneficial to engine life, thus the reason for the square dimensions incorporated in the engine design. 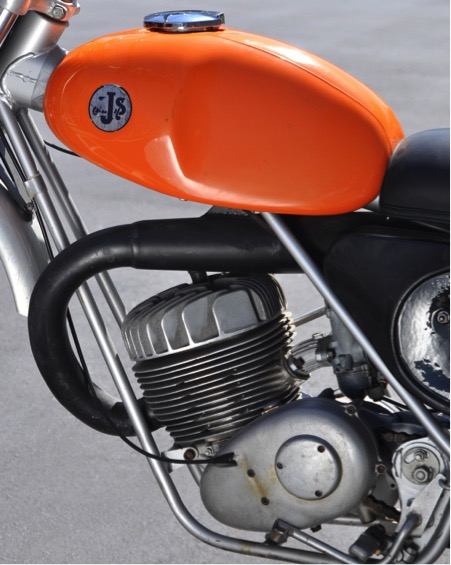 Clearance between the inner crankcase cavity wall and the outside of the flywheels is kept to an absolute minimum to insure maximum fuel charge through the transfer ports and into the combustion chamber. 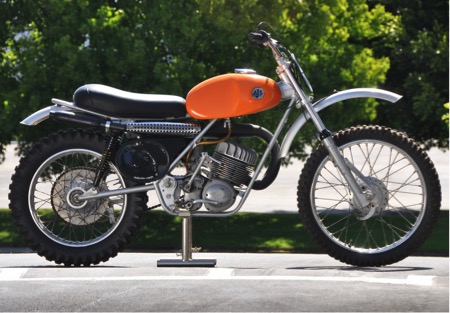 Flywheel halves are fully machined, and the crank mainshafts are integral for added rigidity of the crankshaft assembly. The big-end crankpin is pressed into the flywheel halves, and acts as the inner race for the con-rod rollers. Large roller main bearings are used on the mainshafts.

The piston is supported on the small end of the rod by a bronze bushing, which seems curious. As this area of mechanical stress is subject to intense heat and friction, a needle bearing in this location – common two-stroke practice these days – would seem more appropriate.

A flywheel magneto, located on the right side of the crankcase, provides ignition. The points and condenser are accessible under an inspection cover on the outside of the magneto flywheel cover.

This is handy for timing checks, as the points, are actuated by a cam on the outer end of the crank, and you don’t have to peer into a small slot in the magneto flywheel to check the point gap. 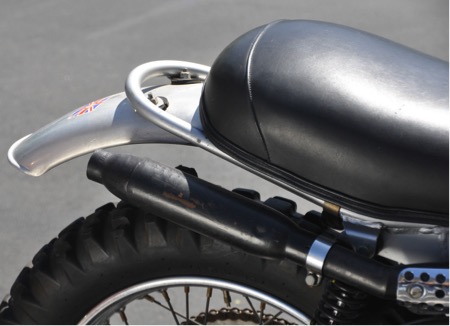 On the left side of the engine, an aluminium cover, houses the primary drive and clutch assembly. Power is transmitted to the clutch by a Reynolds duplex roller chain. A single diaphragm type clutch spring applies pressure to the all-metal clutch plates.

At this point it is worthy to mention that it is not good practice to hold the clutch lever in for more than a few moments at a time. The friction caused by the slipping clutch will cause the metal plates to heat up and swell, thus making gear changes hard and neutral almost impossible to find. If the clutch is used as intended rather than a substitute for neutral, everything works fine.

Transmission design is conventional, following tried and true British practice. The mainshaft attaches to the clutch centre hub, and passes into the separate gearbox case. Spacing of the four ratios is close; to suit the engine’s torque curve and the type of events the machine will be used in.

The shift pattern is an upward pull of the lever to engage low, with the remaining three on the down stroke, and neutral between low and second. It would be preferable if the pattern were reversed, with a downshift required for low. It is much easier to step down to engage a low gear while bouncing over rough ground. Otherwise, the gearbox was terrifically smooth, allowing shifts without the use of the clutch.

To prove they had built a stout engine and gearbox, the power plant was first fitted to a road racing chassis, and entered in various club and national events throughout England. 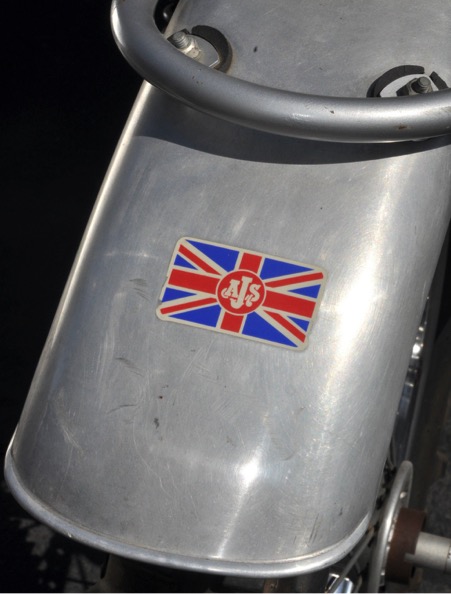 Different exhaust lengths, port timing, carburetor sizes, and tuning methods were tried until the desired power and reliability had been achieved. Frame, forks and wheels had to be designed with lightweight and maximum strength the keynote.

The Norton Commando frame met the basic requirements, so a scaled down version was assembled by the Reynolds Metal Tubing Company, using 531 steel alloys, one of the strongest available. A large diameter, thin wall tube makes up the backbone, while smaller duplex tubes cradle the engine-gearbox unit. Diagonal tubes form a triangle to join the main top tube with the duplex cradle members, and provide additional strength between the steering head area and the swinging arm pivot point. 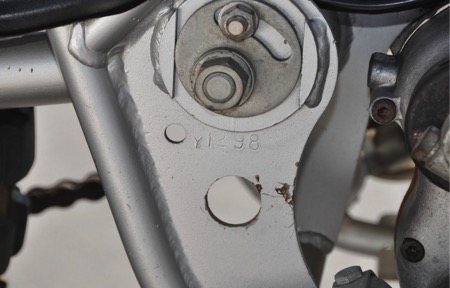 Reynolds 531 is also used for the swinging arm. Flat plates, welded to the duplex tubes that cradle the engine, spread out the stress of the pivot area. Rear chain adjustment is carried out Rickman Metisse style, but with a minor variation. The eccentric discs don’t have to be changed as on the Metisse, only rotated to give the desired slack in the rear chain. This method eliminates adjustment at the rear wheel, and assures a more rigid wheel to swinging arm attachment, while sprocket-to-chain alignment is held constant.

Wheels and forks are AJS’s own design, and show thought, as well as quality in their construction. Conical hubs riding on sealed ball bearings carry the load, while 5-inch diameter brake drums on both wheels do a good job of stopping the machine. Bigger brakes would be an unnecessary weight, and might prove harmful on the slippery surfaces of a motocross course. Impact resisting steel rims are spoked to the hubs. The fork stanchion tubes are chromed, and slide freely in aluminium lower legs. Internal springs work evenly throughout 7-inch of travel. Damping is on the stiff side, but does provide a stable feeling over the rough. There is no rebound “klunk” or bottoming out when landing hard. 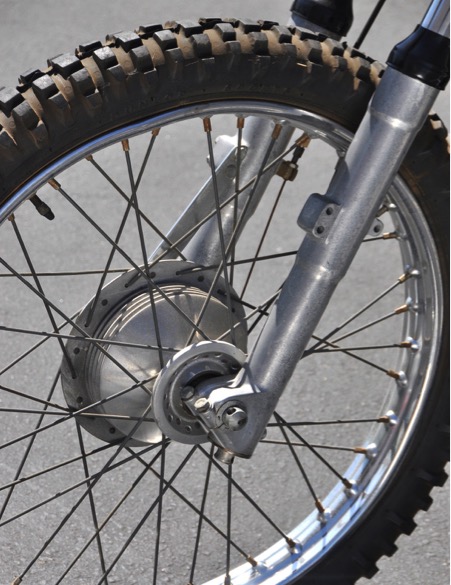 A colour impregnated orange gas tank gives the Ajay a functional look. It is narrow and gives the rider good knee grip to control the machine. The gas cap is the flip-top variety, and would occasionally pop open at the wrong time, allowing fuel to slosh out. Peter Inchley, the AJS Competition Manager, has assured us that the cap was being changed to eliminate the problem. 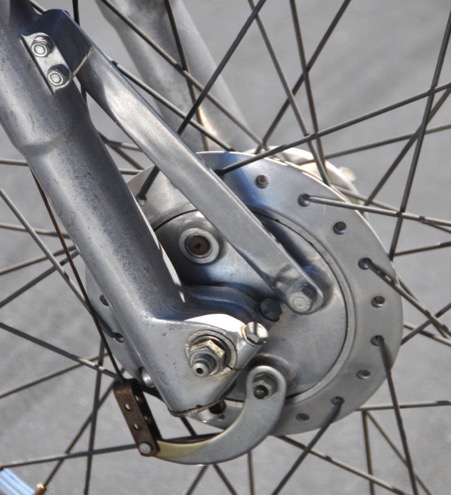 The black vinyl cloth covered seat is comfortable and well placed, allowing the rider to shift his weight to and fro for better traction at the rear, or to keep the front wheel from getting to close to the vertical point. Both fenders are aluminium, and do a minimal job of keeping the mud off the rider. The rear is rubber mounted, while the front is attached to a spring steel brace that is bolted to the lower fork yoke.

The one-piece exhaust/pipe/expansion chamber unit is also rubber mounted, and self-locking nuts are used throughout to attach various components. Foot-pegs are aluminium alloy, and are adjustable for height by rotating them on a splined shaft. They also fold, and have a flat steel spring to return them to their original position should a stray immovable object be encountered. The controls all work nicely, although the aluminium clutch and front brake levers are stiff and thus prone to break easily, don’t keep their clamps to tight. 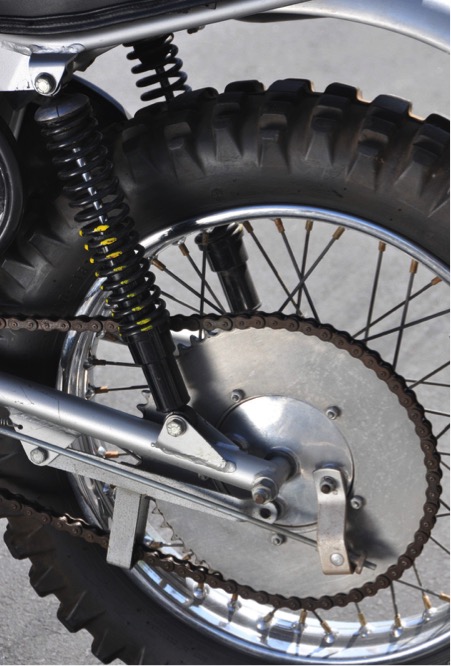 When AJS had a complete machine, British motocross star Malcolm Davis was selected to give the new model a go. He satisfied the firm by taking the British 250 Motocross Championship in 1968, the Y40’s first season of competition. 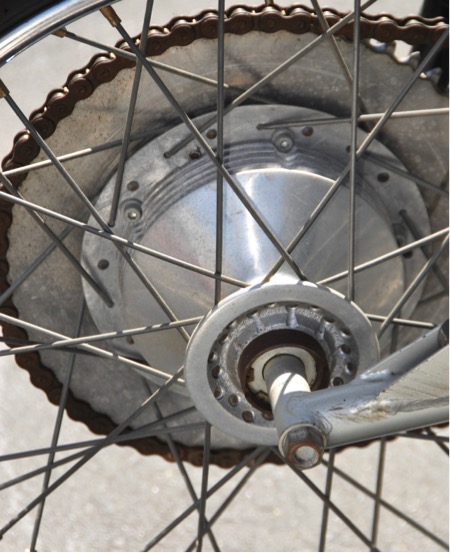 So the new Ajay two-stroke has already proved it has all the necessary ingredients to make it a successful motocross machine.

The engine is functional and performs well. Starting was never a problem. Even when it was loaded up by using the wrong gear and too much throttle, two or three kicks would bring it back to life.

The power curve is mild and there is never a feeling that a sudden burst will make the machine unmanageable. The Y40 does possess a creditable amount of torque for a 250, as shown by pulling it up the “Matterhorn”. It is very easy to overrun the engine’s torque peak without knowing it. This just wastes the usefulness of its pulling power, and prematurely wears the internals out.

Best results are gained in performance by shifting to a higher gear early, and letting the engine pull. This riding technique gives more traction and makes handling easier. 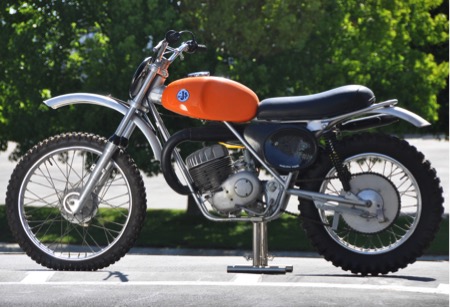 Suspension, front and rear, is one of the finer points of the machine. The forks allow the rider to maintain control without the fear of the bars being pulled from his hands. Bumps and ruts are navigated with minimum effort, and suspension movement during both compression and rebound is smooth and consistent.

At any rate, the rubbing effect is hardly perceivable to the rider, and it certainly didn’t prevent Davis from winning that British title! The Ajay has a feeling of neutrality about it, something like a tree branch that springs back to its original position when bent.

When getting out of shape over rocks and bumps, the Y40 would return to the stable position it held previously.

This is not to say one cannot fall off, but the Ajay does try to keep its wheels on the ground, even when the rider is doing his best (or worst) to counteract the machines built in stability.

Weight distribution is in keeping with motocross tradition of having a light front end. It is possible to pull the front end up with the throttle, but the machine does not give the feeling that it wants to go over backwards.

Success of the Y4 as a machine designed to win motocross races, has already been proven.

It has excellent geometry; predictable/effective suspension; robust engine and gearbox unit; and a generous power band.

If this seat of the pants experience informs us truthfully, the new AJS will do well. 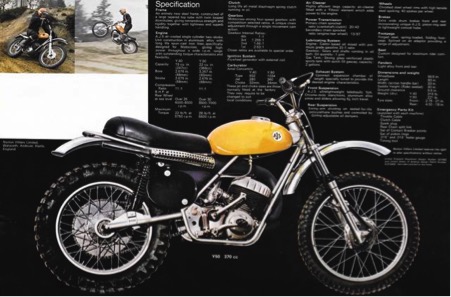