Ex-Cotton rider Pat Minns built a replica of his works Cobra scrambler, and realised that he would have to de-restore it if he wanted it to race again.

One of the biggest problems facing anyone restoring a competition bike is what to do with it when it’s finished.

Even in rainy Britain, there are enough dry days in a summer for the most pristine concours winner to be ridden on the road without the risk of its spotless finish being sullied with anything more damaging than the odd dead fly, but anyone using an off-road bike has to either cope with slippery and abrasive mud, or risk the bike on a rock-hard and dusty surface. 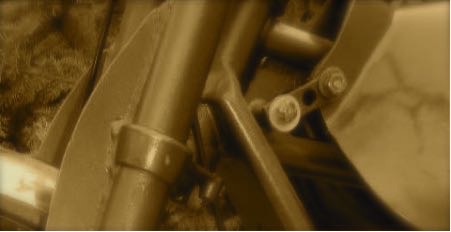 When ex-Cotton works rider Pat Minns decided to build a replica of the machine that he rode for the Gloucester factory in 1964, he was torn between the temptation of racing the bike in Pre-65 Motocross Club events, and his determination to restore the bike as accurately as possible.

Garage owner Pat’s works replica project got underway when he spotted a Cotton Cobra at the British Bike Bonanza in Cheltenham in 1985. The Cobra was purchased from Reading enthusiast Fred Biles, and Pat set about restoring it as accurately as possible.

Like most minor British manufacturers of the time, Cotton used a large number of bought-in components on their competition machines, ranging from Villiers engines to British Hub Company wheels.

The Villiers Starmaker engine, fitted in the Cobra frame, later formed the basis of the AJS Stormer, and Pat was able to obtain parts and advice from former Cotton Team Competition Manager, Fluff Brown. 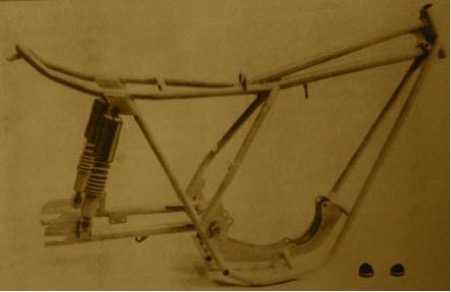 As the bike was almost complete Pat was left with only odds and ends to find to finish the cycle parts. Some of these items came from classic off-road specialists like Adrian Moss Racing of Stroud, who provided the correct control levers, while other bits turned up at dealers who had lost interest in British scramblers long ago, but never got around to clearing out their spares stock.

The rarity of authentic wear-or-damage prone parts like wheel rims and tyres made Pat realize that the bike could be built either as an accurate replica or a raceable scrambler, but not both. An advertisement was placed in Motor Cycle News, in which Pat offered to buy Cotton scramblers. Just one other pre-65 machine was found as a result, and he is now restoring that as an exact replica, while his first bike was rebuilt as a racer.

This accounts for the number of non-original parts fitted to the bike. The Dunlop wheel rims have been replaced with imported alloy components, an Amal Concentric carburetor substitutes for the Monobloc instrument that was originally fitted, and the mudguards are alloy patterns instead of the heavy chromed steel items that Cotton fitted back in the sixties.

According to Pat, weight was always the Cotton’s biggest handicap. Even in 1964, the factory claimed that the 250cc Cobra weighed 235 lbs, while in comparison Jeff Smith’s open-class BSA tipped the scales at just 228 lbs. Although many of the Cotton’s cycle parts were engineered for durability rather than lightness, the real problem had been the weight of the previous Villiers engines. Like most other manufacturers, Cotton were forced to either fit whatever the Wolverhampton factory supplied them with, or go to the expense of modifying the engine to get the weight down, and power up. 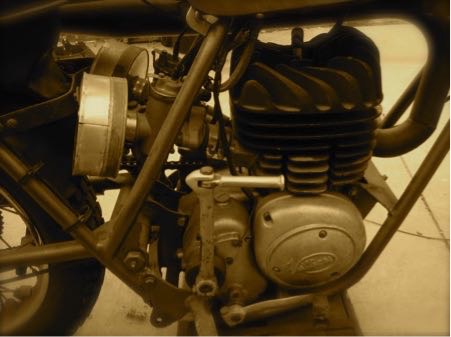 When they first started making scramblers in 1959, Cotton used standard Villiers engines like the 246cc 33A single-cylinder unit with a cast-iron barrel. For 1961, the engines were fitted with an alloy cylinder barrel and wire-wound piston developed by Cross Manufacturing of Bath. This was lighter and more powerful than the standard motor, but expensive to produce, and when Villiers developed their own all-alloy engine, the Starmaker, Cotton dropped the Cross conversion.

At first, the Starmaker project was shrouded in secrecy, with its square 68 x 68mm bore and stroke dimensions, and twin carburetors, the new engine was a radical departure from the low revving, heavy, long-stroke motors previously produced by Villiers. Cotton were given the new engines for their works riders to use on the condition that they didn’t take them apart and look inside, the bikes were looked after by Villiers own team, Peter Inchley and Cotton’s Fluff Brown.

By the time Pat Minns became a works rider in 1964, and the Starmaker was widely available. The secrecy had been abandoned along with the twin carburetors, and Pat’s father wielded the spanners, also the Starmaker’s output was a healthy 25 bhp at 6,500 rpm.

To cope with the bikes weight, the engine was mounted very low and close to the rear wheel, and according to Pat, the only way to ride the Cotton fast was to keep your body weight well back and the throttle open. This helped to disguise the short –comings, of the leading-link front forks. Unlike the superficially similar Greeves suspension, which used rubber bushes in torsion to provide the springing and separate hydraulic dampers.

“It gave about an inch of travel,” Pat remembers, “I suppose the kindest thing you could say about it was that it was one up on the girder forks. The units themselves only lasted about two meetings”.

But as Pat explains, making up for your machines shortcomings was all part of the fun in the mid-sixties. “Each bike had its own failings, and riders used different techniques to make up for them.

The Cotton wasn’t perfect, but it suited the shorter rider, and I liked it”.