By calling an engine the Starmaker, the Villiers Engineering Company left no doubt that they expected it to be a winner.

That new 250cc engine’s launch in November 1962 came as quite a surprise, for in the postwar years the Villiers Engineering Company of Marston Street, Wolverhampton, had set their face, against, competition activities of any sort.

By virtue of simplicity, reliability, cheapness and prudent management, they had secured a near-monopoly on supply of two-stroke engines to the road going British motorcycle industry, so their history in terms of scrambling is quite interesting. 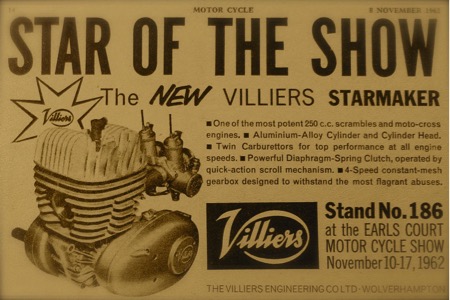 As in 1948, when the little Manchester firm of DOT built a lightweight scrambler for works rider Bill Barugh, it was to Villiers 59 x 72mm 197cc 6E engine that they turned.

Despite Villiers dogmatic assertion that it was not possible to improve their engine, DOT soon nearly doubled its power output from 7bhp to 12bhp, quite an achievement. Then Bill Barugh and the DOT set lightweight scrambling alight, and DOT soon had many imitators.

The most successful of these was Greeves.

By 1960, the Greeves version of the Villiers engine incorporated a light alloy-cylinder and head, a 60mm Hepolite piston, giving a full 250cc, and an Alpha crankshaft with full-circle flywheels and a caged needle-roller big end. With such an engine Dave Bickers won the 1960 Coup d’Europe, in effect the 250cc Motorcross World Championship, against the very best European machines. 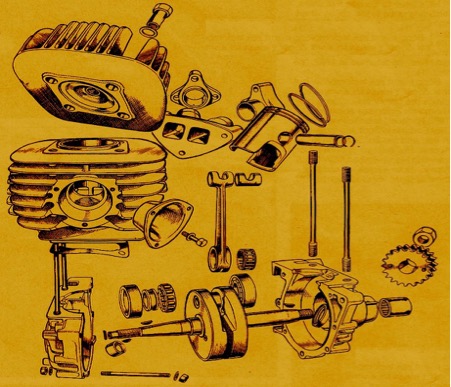 This along with winning the 250cc ACU Scrambles Star, and coinciding with the presentation of these events on television, scrambling was becoming a very popular sport, strangely though these events showed Villiers in a very good light, even though none of the engines that dominated the 250cc class, used Villiers cylinder barrels, or received their help.

So for 1961 Villiers produced the 66 x 72mm 246cc 34A engine, avowedly for scrambling, but with its bobweight flywheels and iron cylinder it was too little, too late, and in standard form was not successful. Then they had the MZ’s to contend with.

Metaphorically gritting their teeth, they did what they should have done years before, and gave young designer Bernard Hooper a free hand to draw up a new engine, owing nothing to the past. Assisted by John Favill, Hooper produced an impressive, modern 68 x 68mm 247cc unit of sophisticated specification, the Starmaker.

One of several details of the original design that did not survive long was the ‘torroidal’ combustion chamber. Its shape was claimed to promote turbulence, a phenomenon that had proved advantageous in diesel engine heads.

In the Starmaker, however, it did little but cause problems, mainly because the spark plug was remote from the combustion charge and uncomfortably close to the piston crown. By the time the Starmaker reached production, it had a squish-band and a normal combustion chamber.

Another distinct novelty was the use of two Amal Monobloc carburettors of 1 1/8th in bore on long flexible inlet pipes that converged into an aluminium manifold. An ingenious and complicated mechanism opened one carburettor fully before the other began to open; this consisted of a throttle cable junction box with two cams relaying pull from the twistgrip to each instrument at a different rate.

The stated intention was to provide a high end gas speed, and flexibility at low throttle openings, combined with a choke area for high rpm, greater than that of the largest racing carburetor available.

Drawbacks of this system were its expense, and complaints from riders that throttle operation was too heavy. Apart from reversion to a single carburetor, the big-end arrangement, conrod and contact breaker drive also all received early attention, the cast-in cylinder liner was dropped in favour of a pressed in version, and the long thin silencer fitted to early engines, which was claimed to boost power, was also soon changed.

At the 1962 show, Cotton exhibited, their scrambler, the Cotton Cobra, but also a road racer as well, the Telstar, named after the communications satellite, this used the twin carburettors and baffled exhaust system from the scrambler.

Villiers had hoped the Starmaker would be adopted for road use, and the Telstar was a step towards this, and hopefully would lead to profitable volume production, not only with Cotton but also companies like Royal Enfield, James and Francis Barnett.

Cotton were indeed to launch the Starmaker engined Conquest sports roadster in 1964, and it was very successful in long distance production racing, winning the 250cc class at the Barcelona 24-hour race in 1965, but sales were tiny in real terms.

Early in 1964 an Inchley developed Cotton Telstar appeared in the capable hands of Derek Minter, fitted with a single 1 1/2 in Amal GP carburetor and a fully tapered exhaust. At Brands Hatch Minter showed the Starmaker’s new form in a race-long battle with Alan Shepherd’s Grand Prix MZ, which ended only on the last lap when the Cotton shed its carburetor.

At most British circuits Minter and his Telstar, later joined by Bill Ivy on his Frank Higley owned machine, made the Cotton’s presence very definitely felt, with Minter taking the 1964 ACU Star. These works bikes had gained a six-speed gearbox, and did extremely well. Villiers produced three of these pre-production gearboxes for Inchley, Ivy and Minter; designed specifically for road racing, they had no provision for a kickstart. A production run of 100 followed, these were produced for the proposed, AJS ‘Double T’ road-racer. 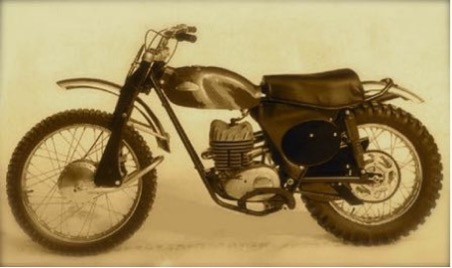 Francis Barnett and James, in the meantime, had started to use another engine, provided by their parent company, AMC. Made at Plumstead, these Piatti designed singles were a disaster, suffering from poor quality control in manufacture.

James did prepare a Starmaker powered scrambler, and at Rollswood Farm in February of 1963, Chris Horsfield won handsomely, beating the BSA mounted Jeff Smith, but James didn’t proceed with a production model.

In 1964 Royal Enfield announced a Starmaker powered scrambler, but little more was heard of it.

In early 1964 James finally abandoned the dreadful AMC engine and announced the Starmaker engined Cotswold scrambler, though they still offered a version with a Parkinson cylinder on a 36A engine.

But by now James and Francis Barnett’s parent company AMC, along with Villiers, were in dreadfully low water, and were not to survive much longer.