Andy won the Tweseldown Championship in February 1967, at the age of eighteen on his CZ, and a week later he was signed up to Norton Villiers as their second development rider, both he and Mayes had raced with Fluff Brown before, as Cotton works riders.

Fluff and project leader, Peter Inchley, were experimenting with different frames to house the Mark II Starmaker engine and had bought a batch of “Petit Metisse” frames from the Rickman Brothers to start. Andy made his debut on the Metisse framed bike at Naish Hill, in front of the BBC TV cameras, where he finished an excellent 4th place in his first 250 Grandstand Trophy race. 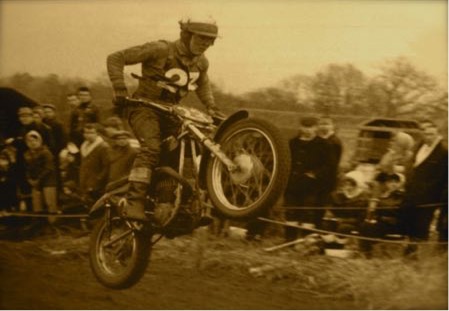 Fluff Brown recalls that despite such a promising start, it wasn’t a fairy tale relationship. “Andy didn’t get on so well with the Metisse framed bike and he was disappointed with his results”.

“So I built up a bike using the Y4 engine in a Cotton frame, and he soon returned to his winning ways”. On the new Cotton framed prototype Roberton was unlucky not to take his, and Norton Villiers, first British Championship win.

However, at the 250 GP at Wakes Colne in July, he was the surprise package as he emerged as the only Brit to get amongst the points.

“The day was saved, however, by an outstanding ride in both legs by Villiers young hope, Andy Roberton. Despite being nervous in this, his first big race, Andy scratched with the best to earn his first championship point for sixth place overall’ Gavin Trippe MCN.

A second place in the British Championship was no mean feat for the test year of Fluff Browns prototype. Breakdowns had been out on the track in front of the public, which was a brave policy for the team to follow. Moral though was very high, with such good results.

Looking at the prototype you can see how close they were getting to the production Y4 model. The wheels, front forks and expansion chamber would change but much of the work had been completed by the end of the season.

The Norton Commando was Norton Villiers priority in 1967, they needed their new flagship machine on the showroom floor, as soon as possible.

Fluff’s development work on his Cotton based prototype scrambler with Peter Inchley and Stefan Bauer, had been a great success.

The Commando’s engine caused severe vibration, so Stefan Bauer’s frame brief in 1967 was to include a ‘backbone tube of large diameter and immense rigidity’.

The Cotton Cobra’s development had paid off; the strength that an oval backbone tube could provide had been proved by it withstanding the stresses experienced on a moto-cross track. The backbone frame was then developed further with the Ken Sprayson framed ‘Starmaker AJS’ and tested in the Isle of Man TT; it was faster than the 1966 version.

The lightweight twin down tube cradle from the Cobra was also used, with the Commando’s engine then cantered forward. Bernard Hooper, designed the Isolastic rubber mountings to decreased vibration and Peter Inchley’s old friend, from BSA, Bob Trigg, pulled all these pieces together to lay out thier new frame, the Z26.

A smaller version of this frame was then used for the AJS Y4 Scrambler, but not with the Isolastic rubber mountings. The Commando’s swinging arm was mounted on the rear of the engine so a new version of the eccentric swinging arm from the Rickman Metisse was designed and the new AJS Mongrel was complete.

The Girling rear shocks were leaned and moved forward on the swinging arm, to give greater rear suspension travel and the long travel AJS leading axle front forks, an innovation, would completed the machine.

Freddie Mayes had raced the Villiers Metisse, and the Cotton based prototype to joint second place in the British Championships, now the bike with its upgraded AJS Mark II engine and AJS Y4 frame was ready for the 1968 season but production wouldn’t start until the new factory was ready in 1969.

The Commando, the Cobra and the Mongrel, had finally come together and now, was race ready, for Malcolm Davis.